To protect and preserve the history and heritage of the true working Jack Russell Terrier from its beginnings in Great Britain to its development in the USA. Our mission is to protect and preserve this unspoiled type of working terrier by educating the public about its appropriate breed standards, genetic health, intelligence, and rich history, thus ensuring its future. 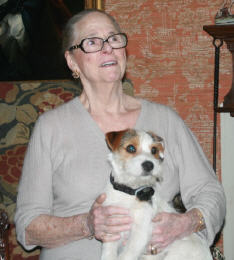 Ailsa M. Crawford
Founder and President Emeritus of the JRTCA

Ailsa Crawford, Founder of the JRTCA, and her husband Harden Crawford, as well as influential terriers and their human counterparts, judges, and others who have influenced the working Jack Russell Terrier throughout the years, are highlighted.

This is a very brief overview of what will be a very large project extending over many years that will ultimately preserve the JRTCA’s history, honor Ailsa Crawford as its Founder, and most importantly – preserve the True Jack Russell Terrier.

The intent is to build something that members of the JRTCA, donors to the Foundation, and all true Jack Russell Terrier enthusiasts, will keep going for many, many years to protect the TRUE Jack Russell Terrier, keeping its heritage alive for another 200 plus years!